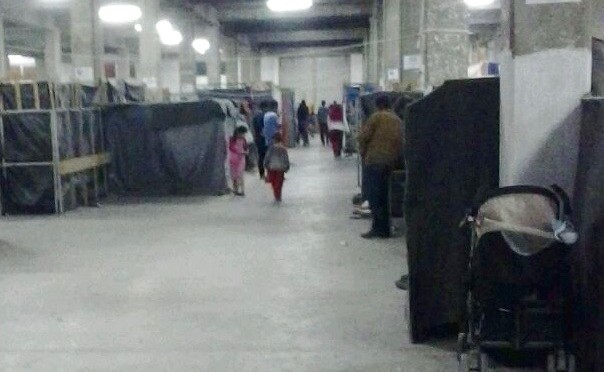 About 500 people are housed in an old factory that once processed wood. The factory has probably been out of business for some years. Bushes are growing on its roof. The next town, Drama, is located about 10 km away. All people live in one big hall. The concrete hall is divided into “rooms” by constructions covered with UNHCR-blankets. As in other camps, the police guard the entrance and do not allow visitors inside. People from the town of Drama regularly bring donations, but apparently are no longer allowed to enter the camp as well. Husbands are already in Germany
However, we talked to a lot of different people outside the fenced factory site. Two Syrian women who have been friends for many years have their husbands in Germany. They started their journey from Damascus on the 6th of January 2016. After the crossing of the Aegean, they arrived on the 14th of March in Drama – only a few days after the closure of the Balkan corridor. 25-year old N. explains her situation:

“We left our country because the war forced us to. Now we are looking for safety. I try to get to my husband. I cannot reach the asylum service in Greece. So my husband tries it with a lawyer from Germany and we did send all our papers to the German embassy in Beirut. But now they say, that my vaccination card is missing. I tried to speak to the doctors here, but they are always telling me to ask again tomorrow.”

“For more than 5 weeks we get the same food every single day: pasta with tomato sauce. At night, it is very loud, some people are singing, drinking and listing to loud music. So we can’t sleep well and are very tired.” According to a man who is staying at the camp with his family a lot of people have psychological problems and it is getting worse day by day. Tensions are rising
We are told, that tensions in the camp are rising. Two days ago, a man was badly injured in a fight and was brought to the hospital. People told us that the police just ignored the fight and did not intervene.

As in the other camps, there is nobody in the camp that informs the people of their legal rights and options. The two women have heard other people trying to get appointments in Alexandroupoli because nobody was able to reach the asylum service via Skype (we reported on the non-functional Skype procedures here). They apparently succeeded and got appointments for August. Others are leaving the camp for Athens or to find their own way. It is no surprise that he two women want to leave the camp as well and go to Athens. They hope to find better accommodation and some organizations in Athens that could help them with the process of family reunification and give them information about other options as well. All pictures are taken by people living in this camp.