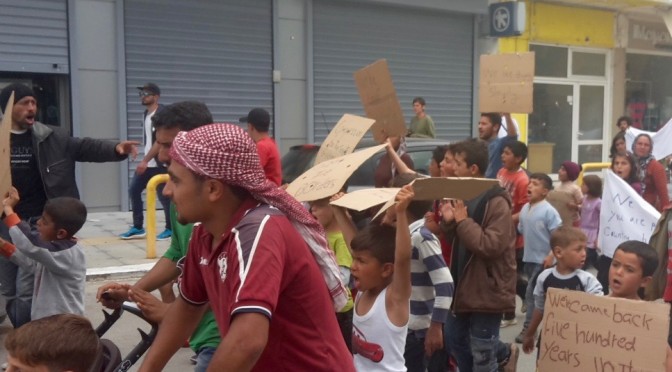 Protest in Polikastro – most vulnerable people are housed in tents without proper mattresses in Cherso.
In Cherso, a camp close to the Macedonian / FYROM border, the situation seems to have improved a little since our last visit 5 weeks ago. On the dirt road there is now gravel, and a drainage trenches have been dug throughout the camp. And sometimes wifi-access is available in some areas. But to stay for weeks in tents, without mattresses and without information is very harsh. According to the UNHCR there are over 3’900 people „housed“ in the current 440 tents. This estimation seems too high for us. We were told that many people try to find their own way out of the muddy camp and move on. No proper housing for most vulnerable people
What was shocking in Cherso is the fact that even the most vulnerable people have to sleep in these tents without proper mattresses such as a man that suffers from chronic kidney failure and has to go to the hospital for dialysis three times a week. Or a person from Syria that was shot in the back in the war and is now paraplegic. Or a pregnant woman, that should lie in bed for the next few months because of a blockage of the uteri by the placenta. Or two women with newborns, that weigh less than 2kg.

Family reunification: Greek asylum service not reachable
As in all other camps, we spoke to many women, who have their husbands or children in Germany. They all are trying to get an appointment with the Greek asylum service via Skype (as this is the only way to reach the asylum service). But nobody succeeded and it is therefore no surprise that people get more and more frustrated.

Protest in Polykastro
In the near by camp of Nea Kavala (according to UNHCR also over 3’900 people in 611 tents) the tensions are also rising. Around 100 people of the camp took the streets and walked to the near by town of Polykastro, shouting: „Open the borders!“