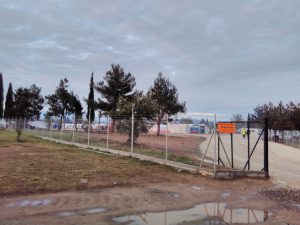 On 26 April, a meeting took place between camp authorities and representatives of the refugees in Cherso. The people in the camp demanded to know what will happen to them. They are frustrated and angry about the continued uncertainty and waiting under miserable conditions, the difficulties of accessing family reunification, relocation or asylum services via Skype, and the difficulty to reach the cities where interviews take place for the few who get through. One of the protesters Moving Europe spoke to, Y. from Syria, repeated again and again:

„We want to know what will happen to us. We want to have a better situation.“

However, the response of representatives of the camp authorities and organisations present in the camp was that they cannot change the situation: The border will not re-open, they cannot say what will happen, and the only option is to continue waiting. In response, the refugees started to demonstrate, and kicked out the authorities managing the camp and the organizations working within it, closing the gates and refusing to let them re-enter the camp.

The situation was very tense and people were very angry. At some point, one of the humanitarian workers in the camp started negotiating with the protesters until they agreed to let the camp authorities and staff return to the camp, to once again demand to improve the conditions in the camp and the possibilities for asylum, family reunification and relocation. However, none of this happened so far – instead the situation remains largely the same and the Skype service continues to be mostly inaccessible. 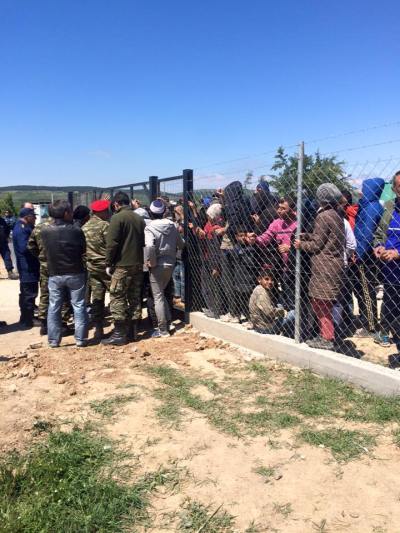 In Cherso, Moving Europe spoke to 8 Syrian women, who have all been stuck in Cherso camp for 2 months, having fled Syria and undertaken a long and difficult journey just to be told that the border is closed. They are unable to pass the Greek-Macedonian border to join their husbands, sisters, brothers and children who are waiting in different parts of Europe. One woman, N., had her baby born in the camp 7 days ago and asked for medicine. Her two other children and her husband are in Germany. Another woman, W., with 5 children is worried about how to unite with her husband and her other 4 children in Germany, while not knowing how to provide for her one child in Cherso in the meantime. The separation, uncertainty, lack of information on future perspectives and waiting under difficult conditions is unacceptable. 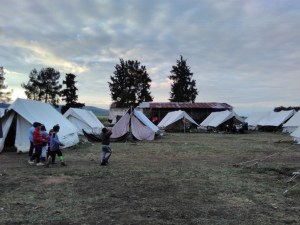 40% of the people in Cherso are children Photo: Moving Europe

Waiting and suffering under miserable conditions and without perspectives

The conditions in Cherso camp are wholly inadequate. The families and individuals in Cherso repeatedly emphasised that the living conditions are unsupportable, there are snakes, the water is not clean, the food is not good, everybody runs out of money and people feel insecure. Many people who live in the camp suffer under the inadequate conditions and consequent physical and mental health problems without any adequate treatment available. I., has a two years old boy, who has asthma. They got respiratory equipment, but she does not have electricity in the tent to connect the machine.

The group we spoke to has been in Cherso for 2 months. Many women have pictures of their children „before camp“, and „after camp“, showing how different the children looked in their life before, and after being exposed to the conditions in the camp for several months. The women we spoke to worry about their children:

„We fled the war because we do not want to loose our children, what if we lose them here?“

The people ask for a political decision to change the situation. But instead of answers, there is the waiting and incertitude.