Interview with S. who is living in the camp in Chalkero

Moving Europe: Can you tell us about the situation in Chalkero?
We are loosing our hopes day by day. And people get more and more angry. The situation is very difficult. Only very few people reach the asylum service via Skype, the option of relocation seems to be a trap and the conditions of living are bad. We all are running out of money.

Moving Europe: Do people have to spend a lot of money?
The food is so bad, that most families buy groceries to cook their own food on small fires. We cannot eat the military food anymore. Macaroni pasta for weeks and weeks just makes you sick. That means that a family has to spend around 20 Euro a week for food. Al lot of people have to ask friends and families for money in Syria and ask if they can send money by Western Union to Kavala. But 20 Euro is a small fortune nowadays. Because of the war the inflation skyrocketed. Now you need around 600 Syrian Pounds for 1 Euro. But the average monthly salary is just about 16’000 Syrian pounds. This is now just around 25 Euro. 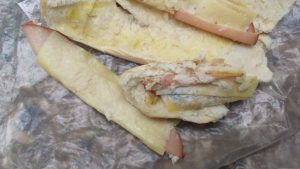 Food given to people in Chalkero

Moving Europe: We reported about protests in Chalkero. Can you tell us more about it?
We protested about our situation for weeks now. But on the 29th of April, people had enough and got tired of the promises that were never fulfilled. And the heavy rain and the rotten food accelerated the willingness to protest again and block the road. But the main reason for people stuck here is the psychological pressure. We do not want to be stuck for months and months. So on this day, around 40 people out of the 200 in Chelkero blocked the road. The police officers called their chief and later he came and talked to the people and said it’s a fault doing that and that we are hurting the Greek people. The blockade ended, when he promised to have a meeting to discuss the situation and said that they will do their best. 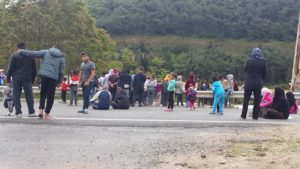 People blocking the road in front of the camp

Moving Europe: What are your demands?
We want the border to open. But we know that this is a European decision. People want access to the asylum and relocation system. And access to family reunification. But to get an appointment with the asylum service we first have to reach them by Skype. But they have only one account on Skype. So it’s nearly impossible to reach them.
For the family reunification I think around 15 families in our camp have the right to go to Germany, because the women have their husbands in Germany or underaged children. So, to be reunited is the right for about 50 people in Chalkero. But nearly nobody can reach the asylum service for reunification. And we want better conditions of living. Our tents get wet when it rains, we want decent food and we want to know what will happen to us. 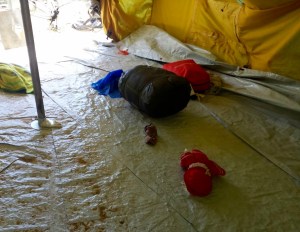 Water enters the tents in Chalkero

Moving Europe: And do you think they will keep their promises?
I do not know. On Wednesday, we had the first of the promised meetings with a police officer, the UNHCR, a person from the municipality and a doctor from Médecins du Monde who is working in our camp. They promised to improve the conditions of the camp. We asked them to bring caravans or containers for us to live in. But for example they still do not allow volunteers to bring to us donated food. The families need pampers for their small children and baby milk.
I do not know if the conditions will get better for us. Yesterday a high representative from the church came to the camp. He was kissed on his hands by the police officers. So he must be important. They brought donated children clothes and took pictures. If they will do something about our situation I do not know.

Moving Europe: Do you have any plans for the future if the situation does not get better?
We are in contact with people in other military camps. Some are thinking of doing a protest on the same day so people do not forget about us.