The smallest camp in the province of Pieria (next to Katerini) is located next to a highway outside a small village. According to UNHCR, 200 people are currently staying in this camp. It is managed by the Hellenic Army and guarded by the Hellenic Police. 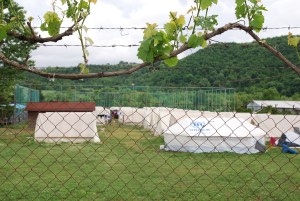 Conditions in the camp
Moving Europe talked to several persons, who reported not having proper mattresses to sleep on, just thick blankets and nylon carpets. Due to its location in the mountains, the site gets very cold during the nights. Nevertheless, people seem to prefer this camp to previous sites where they had to stay. Formerly, the camp was used as a picnic area. Now the people in the camp can use the children’s playground as well as a small terrace with a roof next to a restaurant. Hot meals are brought to the camp three times a day. But like 17-years-old A. told us: “Its every time the same. We also cook for ourselves sometimes. We have two small hotplates. You can cook on them for one family. But now the power cable is broken.” 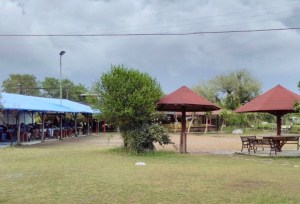 Sanitary facilities and health care
According to the UNHCR there are 13 showers, but people told us that they have only 2 showers and “sometimes hot water, sometimes not”. Toilets and showers are not cleaned regularly. Only some of the most vulnerable people are allowed to stay in buildings, whereas most people have to stay in tents. Moreover, residents of the camp reported that medical services are difficult to access. The next hospital in Katerini is 10km away, but it can be difficult for the people to get an appointment there. „Most time, the people get a new date and have to come back in another week. Once a week a doctor comes for  medical appointments. But a lot of people here have problems, so these few hours are not enough”, S. from Hamah told Moving Europe. Other residents of the camp reported numerous serious health problems needing treatment. 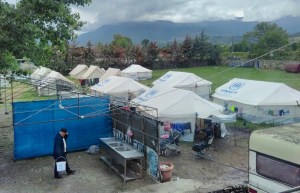 Relocation, family reunification and asylum via Skype
As in many other camps, people reported general problems with accessing reliable information and tremendous difficulties with accessing relocation, family reunification or asylum services via Skype. The response from camp authorities is to „wait, wait, wait“. Reportedly, only one person got a response from the relocation service on Skype, but without any concrete results from the short call. Furthermore, regarding any official procedure, it is difficult for people on the move to provide the required documents, as these have often been taken away or destroyed before or during the journey. The conditions in this camp may be better than others, but this is not the primary concern. “I did not come here to just eat and sleep, I came here to leave and continue the journey,” A. from Damascus explained. 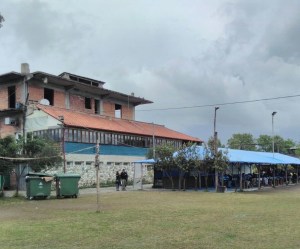 Push-backs from Macedonia to Greece
The closed border and the dysfunctional asylum, relocation and family reunification system forces people to seek alternative routes. “By closing the border, they are forcing people to go illegally,” L. from Damascus emphasised. Like in the other sites, people told Moving Europe about attempts to cross from Greece to Macedonia on irregular routes. A. from Syria reported having walked the whole way to Skopje with his friends, but they were picked up and pushed back to Greece by the police. He described that the police took them back to Idomeni without any legal procedures. 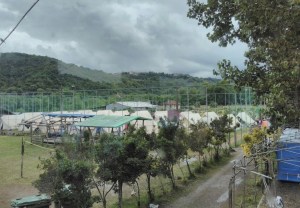 Self-organising
Because no education is provided in the camp, people in the camp started a self-organized school, which they hope to continue and expand. To do so, they need materials such as pens, notebooks, board and books.